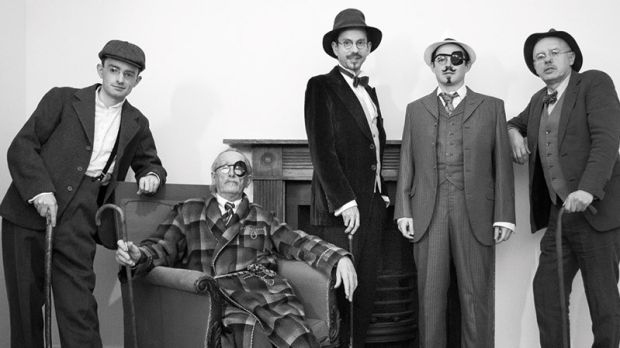 Cinema’s interaction with James Joyce (who famously founded Dublin’s first movie house) has been erratic. Language is everything in the books. Yet film squirms under such logorrhoea.

In his delightful, playful study of the relationship between Joyce and John McCormack (Louis Lovett), the great tenor Pádraig Trehy, sensibly, approaches the work – Finnegans Wake in particular – from an oblique angle. There are a fair few words in Shem the Penman Sings Again, but this is undeniably a full-on cinematic experience.

Reminiscent of work by Guy Maddin, the great Canadian eccentric, Shem the Penman gestures towards silent film as it talks us through the careers of two very different talents. We get tight irises. We get some wonderful music – now avant garde, now sentimental – from John O’Brien. Hugh O’Conor, Frank Prendergast and Brian Fenton, playing Joyce at various stages of his life, offer performances that veer from the quietly naturalistic to the broadly pantomimic.

Now and then the film- makers give in to the greatest hits. Joyce really does point out that Ulysses will “Keep the academics busy for a century”. Shot on a tiny budget, the picture is, perhaps, just a little over-extended. But this remains a vital contribution to Joyceology.