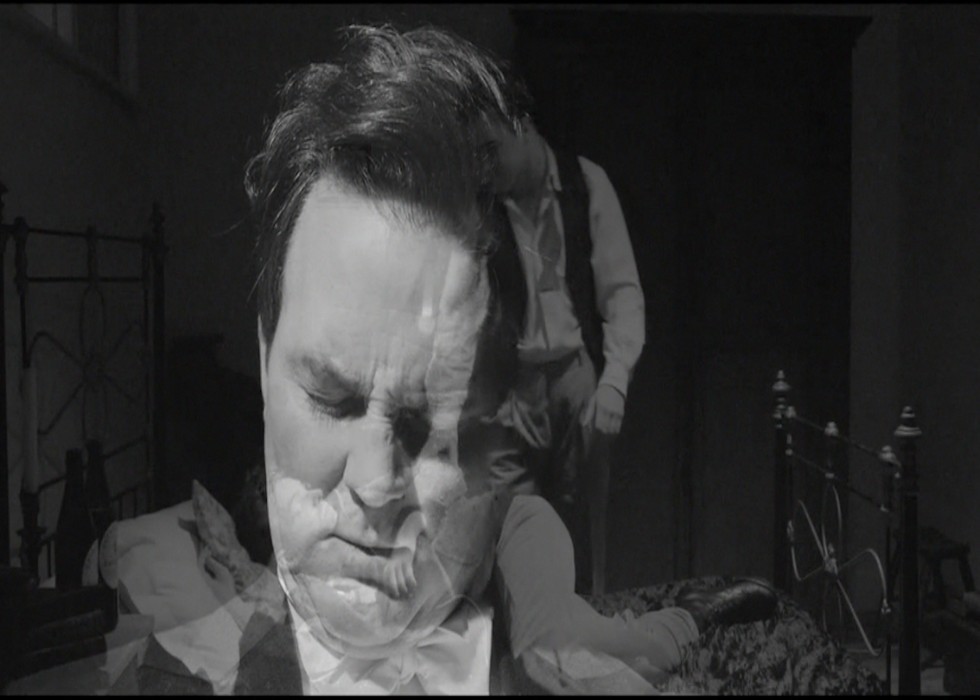 Sean Finnan talked to Pádraig Trehy about his film Shem The Penman Sings Again, which deals with the actual and much fabled friendship of James Joyce and John McCormack.

The world-renowned writer and the extraordinary tenor first met in 1904 when Joyce still had hopes of becoming a professional singer himself. They reconnected in Paris in the 1920s and Joyce was to use his first-hand knowledge of McCormack to create the character of Shaun the Post in his famously ‘unreadable’ final novel, Finnegans Wake. As Joyce struggled with the book, he portrayed himself in it as Shaun’s lowly twin brother, Shem.

Joyce’s twin obsessions, singing and literary experimentation, flow through the film as his and McCormack’s encounters are reimagined in a variety of early cinematic styles, interrupted by four short films-within-the-film charting the exploits of Shem and Shaun. As Joyce’s eyesight fails, the narrative is carried by a mix of archive recordings and imaginary radio broadcasts, giving us an emotional connection to an increasingly isolated Joyce.

What was it that caught your eye about the relationship between John McCormack and James Joyce?

I was interested in both of them separately. The two of them have been a kind of constant in the background of my reading and my listening. I’ve always had a love of early singing and early recording and I knew that there was this fabled meeting of McCormack and Joyce at the Feis Ceoil of 1903, although it isn’t actually true. Between the jigs and the reels, by 1904 they had made each other’s acquaintance. So there was a connection in actual historical terms but what interested me also was that there was this connection between the two in Joyce’s Finnegans Wake. Joyce has used the figure of McCormack to make up the character of Shaun the Post. And that is when I really started getting interested.

I, like many people, had struggled with Finnegans Wake. I had actually thrown a copy out at one point out of frustration! But I thought that McCormack and singing could be a way into something that is kind of impenetrable in some ways, intellectually.

There’s great emotion in McCormack and there’s great emotion in that style of singing; not just the Opera, the whole Irish ballads that McCormack would’ve been most popular for. Then I discovered that Joyce was listening to this really sentimental music and liked to sing after dinner or after a few drinks. I just thought that there was this lovely juxtaposition between the so-called most difficult book in the English Language and these sentimental songs. There was a crystallisation about six years ago when the idea just sort of popped – the emotion in McCormack versus the hard modernism of Joyce.

So you approached Finnegan’s Wake from a different angle…

I started reading Finnegan’s Wake with the idea of performance. It’s not an original thought by any means – but basically treating it as a performance text, that it is like a libretto. John Cage said that it is like an opera. Joyce himself called it an oratorio. Also, when you look at the biographical details, as Joyce was writing the book, he was also going blind. So that after a while it became impossible for him to physically write the book. He was dictating it. He was performing it for his legion of secretaries, including Samuel Beckett. So with the figure of McCormack singing and Joyce dictating the book there is a real twinning there.

That aspect of performance is very much reflected in the film’s aesthetic.

Performance is one of the key things.  It’s there in the shots and sounds of audience in the film a lot and even in the title of the film. In 1904, Joyce and McCormack sat and sang together in front of an audience and an appreciative audience for the style of singing they were engaged in. McCormack went on to have that audience multiplied by millions and went on to make millions. We can’t equate these days how much money he would have earned. He was giving away 25 to 50 grand a week during the First World War. There is a reason he was a Papal Count. It has nothing to do with his piety; it has to do with the size of his cheque!

At the same time that McCormack is building his audience, Joyce is losing his… if you can say he had an audience. He had a small really tightknit group around him that were fanatical but he doesn’t have the audience that he probably craved. Especially if you have ever performed live in front of people. This is something that is quite addictive and I think that having had that once Joyce would have missed it for the rest of his life. So that idea of the performance and audience, and lack of audience, are central to the film.

It asks the question that if Joyce was financially successful at singing would he have written anything?

I did start with the idea of what if…  what if Joyce had become a singer as opposed to the great writer. But I really don’t think it was ever actually on the cards. I think that is one of the interesting things about having McCormack there because Joyce would have realised, I think, that he couldn’t have been great. If Joyce wasn’t going to be great at something then he wasn’t going to do it. That is my interpretation anyway. He could have made a living as a singer very comfortably and he would’ve been at the right time, at the beginning of recording – and by all accounts, and by McCormack’s own account, Joyce had a voice as lyrical as his own. But I don’t think he would have had the personality to carry it off like McCormack had. I think Joyce would have been clever enough to know that, and realise that, what he really wanted, the greatness that he wanted to be, was only going to come from writing and reinventing the forms that he wrote in.

Why did you go down the route of portraying this aspect of Joyce in old-style silent cinema. It’s very dreamy. It’s kind of like Finnegans Wake in that way. You never have a full grasp of the narrative. You kind of sweep in and out of what is going on at times.

Most of that would be my personal taste, I suppose. When I started thinking about this idea first, it started life as a documentary. There is about 30 seconds of footage of Joyce – at the time that I dreamt this up I wouldn’t have been able to afford even that two seconds. For me, anyway, it’s useless. It is 30 seconds of him coming out of a doorway in Paris and walking down the street. So it’s really of no benefit.  It doesn’t really tell you anything. I was going to have to find a way of recreating the main events in the story so to speak.

I didn’t want to make a drama documentary. The reason I wanted to make films was Charlie Chaplin. I have wanted to make a silent film for 30 years. So with this idea, the more and more we thought about it, the more and more we realised the budget was never going to be big, the silent film option became more of a logical step. And then, as you say yourself, the dream aspect of Finnegans Wake; it is supposed to feel like you are falling into a dream, like that time before you dream where you are just falling out of one consciousness into another. I think that that drift is in silent films. You can get that uncanny kind of sense out of using silent film today that you couldn’t have got 70 years ago.

The film contains some particular abstract and intense psychological scenes. What was the thinking behind that?

Well some of them are taken from the surrealism of Paris of the 1920s. Some of them are directly lifted! I’ll leave you to find out where from! But they are direct references to films made in the ’20s. I don’t necessarily have documentary evidence that Joyce saw these films but the idea was that this is what people were doing cinematically around Joyce in the ’20s. These are people that were reading Joyce; these were people that Joyce was meeting and talking to. This is how they worked, using cinema to explore some of the same ideas that Joyce was exploring.

You make me want to go back and read Finnegans Wake now.

That is one of the great things about the screenings it’s having. A lot of people are coming out saying I’m going to buy a copy of Finnegans Wake now. All joking aside. One of the things I wanted is that people would do that. Here is a book that comes with a label of being unreadable and, yes, maybe if you start on page 1 and try to read it to the end you will fail. But if you pick it up randomly and read it out loud I think you might have a bit of fun.

There’s great wordplay and there is a great playfulness in Joyce, playing with ideas, bouncing them and crushing them off each other. You can find so much in every page – and that is how I was reading it at one point: one page a day, and sometimes randomly. Obviously, there are sections of it that I had to sit down and read, if you can do such a thing. But for my own enjoyment, I was picking it up and reading one page every single day and playing with it.

Every single page has at least one kind of joke, a piece or humour, in it and that is one thing I wanted to carry over to the film – it needs humour if you are going to be that experimental. If you are going to demand your audience stay with you, for me, it has to be funny. Also, I don’t want anyone to feel stupid. That is not what it is about. There is this thing with Finnegans Wake; people feel stupid trying to read it. That is pointless.

I read somewhere that Joyce was laughing every single day while he was writing it.

And that is the spirit you want to get back. How do you get that back? I think you’ve got to start outside it. He’s got popular songs, he’s got comedy, he’s got music hall. There’s loads in it is that is not highly intellectual. Maybe they are the way you should go into it. And if one page doesn’t work for you, you can maybe skip to the next page.

Like the film, it is not linear in any way. It is a dream – and dream logic is fun.